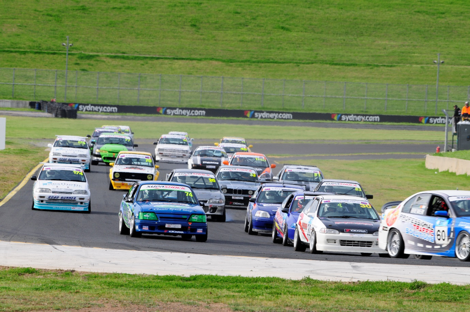 Posted at 11:28h in Round Review by lindadmin
Share

The final round of the NSW state championship had arrived at Sydney Motorsport Park. The Improved Production Champion for Over 2L and Under 2L will be decided by the end of the weekend.

The racing format would be one combined qualifying session, two combined races plus one trophy race for the Under 2L and one trophy race for the Over 2L. It was a star stuttered large field that came out to qualify on Saturday morning. Previous champions like Bob Jowett and David Crighton would make a cameo appearance for this event. Qualifying saw some fast lap times with Graeme Watts claiming pole and Peter Ingram beside him on the front row. The second row consisted of Matthew Ingram and South Australian visitor Grant Maitland. In the Under 2L Crighton claimed pole (8th position) and Mathew Harris (9th position).

Watts made a brilliant start and was closesly followed by Maitland, as the field came around turn 2 Philip Larmour had a gentle spin the unfortunate Peter Woods braked to avoid hitting Larmour’s car. No collision was made but both drivers lost plenty of time. As the race wore on Watts built up a commanding lead from Maitland and the two Ingram brothers. In Under 2L land Crighton and M Harris were dicing for the lead. Ben Serifovski in his green and black Commodore coasted to a halt outside turn 2. He came out of the car and jumped the tire wall to safety and watched the rest of the race from there. Mike Fitzgerald in his little blue Civic also spun at turn 2 and he was not the only one, Roy Anderson had problems in that section of the track coming to grief a few times and losing plenty of time. The Ingram brothers overtook Maitland to take second and third position albeit a long way behind Watts. The final result was Watts 1st, P Ingram 2nd and M Ingram 3rd, however M Ingram received a 10 second penalty promoting Maitland to third. In the Under 2L Crighton finished on top followed by championship aspirant Harris and Jowett third.

Race 2 started on Sunday morning and the conditions were completely different to the day before. Steady rain had settled in the Sydney basin creating a wet and slippery track for the drivers, this would be 4WD territory. Watts again made a handsome start but it was not long after that he lost the lead to the Mitsubishi Evo of Michael King. John McKenzie in his V8 commodore was surprisingly strong in the wet conditions and was able to follow and eventually overtake the 4Wd car of King. Most cars were struggling with the conditions however McKenzie, King and Christopher Thomas were pulling away from the rest of the field. In the Under 2L the light and the nimble Suzuki Swift of William Harris was holding off Jowett while M Harris was in a strong third position.

During lap 4 Thomas overtook King for second position and as the race wore on the leaders spread out. The first three finishers were McKenzie first, Thomas second while King finished third. In the Under 2L W Harris was triumphant closely followed by Jowett while Peter Foote finished third. Young Matthew Harris gained enough points to become the NSW Under 2L champion, a model of consistency and speed.

Race 3 was the Over 2L trophy race, the conditions were very wet and the visibility was quite low, as the cars came out on the warm up lap the rain was probably the heaviest it had been all day. At race start the 4WD of King took advantage of the situation and lead the pack for the start of the race. Thomas was handling the conditions better than most and settled in second position, by mid race distance rivers were forming across the track, P Ingram, M Ingram, McKenzie and Peter Bellette were dicing for third position. King and Thomas who were running 1 and 2 built up a considerably gap to the third place battle. P Ingram was able to break loose from the group and came home a distant third, he gained enough points in this race to become the Over 2L 2016 NSW champion. As the chequered flag fell, King finished first, while Thomas came home a strong second. This was the last race for the Over 2L for the year and Peter Ingram was a deserved champion.

The trophy race for the Under 2L was held in near torrential rain. Jowett made a brilliant start and was closely followed by the Suzuki’s of the Harris brothers. The newly elected champion M Harris retired after only 1 lap. All the cars were struggling in the conditions with constant wheel spin as they aquaplaned in the puddles. These harsh conditions got the better of the experienced Jowett, his car went off at turn 3 hitting the tyre barrier. This caused the safety car to come out, the marshal’s tried to free the stricken car of Jowett but it was soon evident that it won’t be an easy task. The cars finished the race under safety car conditions and the final order was William Harris from Bradley Harris and Peter Foote third.

It was a great year for the Improved Production category with reasonable sized fields and entertaining races. Two new champions have been crowned and we are looking forward to a bigger and better 2017.

A special thanks to all the fire marshal’s and volunteers that are involved with motorsport, without their hard work and commitment we all would not be able to enjoy and participate in the sport we love.